My journey with Microcontrollers and Electronics

Learning is a process that never ends.

Today I took one 7 segment display from my college lab. While I’ve used these before, I saw this after a long time. Now I was trying to remember how to operate it. The one that I got was common cathode type. So in this cathode is common. Now cathode is the negative terminal of 7 segment display and needs to be grounded. So logically if you want any segment to glow you need to supply Vcc. But 7 segment display is nothing more than a group of led’s arranged in specific order and of particular shape. So like any ordinary led’s it will definitely burn if the current exceeds the rated value. That is why we normally use current limiting resistors. But testing using that set up is tedious. So we’ll learn how to test the segments using a multimeter.

One more thing, the printed code on seven segment display will have a CC mark for common cathode and A for common anode.

Above figure shows both the variants of 7 segment displays i.e the common anode and common cathode.

1) Keep the multimeter in diode mode.

2) Now depending upon which variant you have you’ll have to make connections. 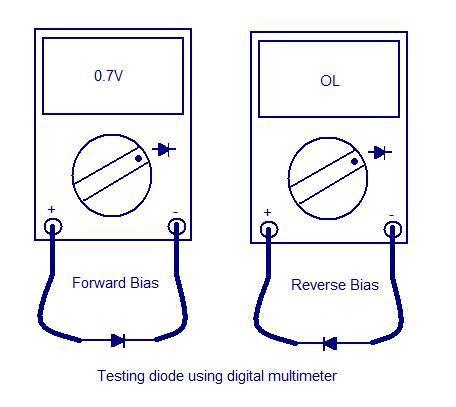 For common cathode place the negative probe of multimeter on the centre pin and then place the positive probe on the segment pin that you want to test.

For common anode place the positive probe of multimeter on the centre pin and then place the negative probe on the segment pin that you want to test.

Hope this tip will be useful.

Follow My journey with Microcontrollers and Electronics on WordPress.com

Follow My journey with Microcontrollers and Electronics on WordPress.com